I did a ^7 oxidation firing last week and here are the pots. 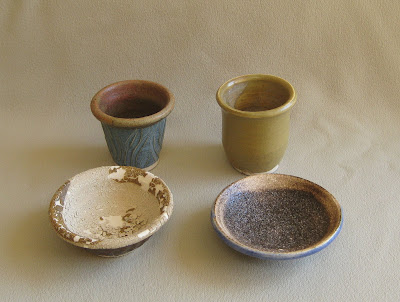 These 4 pieces are tests. Upper left: the inside is an earthenware slip from Idaho which turned out to be a smooth stony mat, a rusty blush where thin and dark yellow/gold where thicker...makes me want to make some fake rocks! Upper right- a different batch of slip of Idaho earthenware- it's a satin mat. I put streaks of a Gerstley Borate wash on the inside; those are the lighter areas. I see good possibilities for this stuff.

Lower left plate: I managed to collect a little of the material that was bubbling out of a "mud pot" in Lassen Park ...just had to see what would happen when it melted! Well, it didn't...just became flakes that didn't stick to the pot, not even where I brushed some GB wash. Wonder what it is composed of?...something really refractory, for sure.

Lower right plate: I brought home some material from a parking lot in Lassen Park because it looked like ash. I sifted out the larger material and sifted some of the fine stuff on this plate. It melted enough to adhere, but will need a higher temp. to melt. I might add some to a stoneware body, or test it as specks in a glaze. 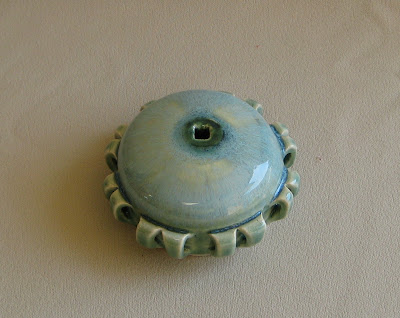 I'm calling this a paperweight (it's weighty!). I was making an enclosed sphere and it got too soft and started settling down. I guided it into a fairly even shape and spent way too much time carving the double wall. But it was worth doing, and when you hold it to your ear, it sounds like wind on the prairie. 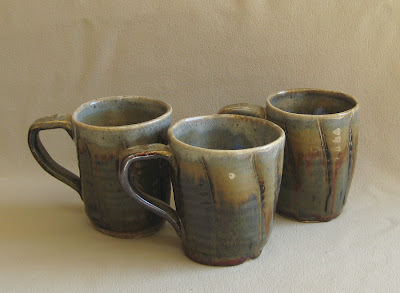 I tried a slight change in the handle shape on these cups...flat on top to prevent your thumb from sliding down the curve. 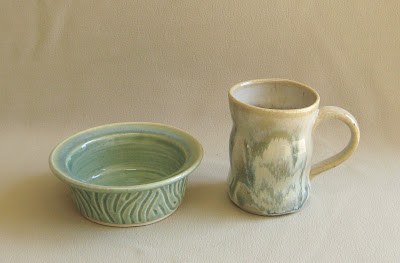 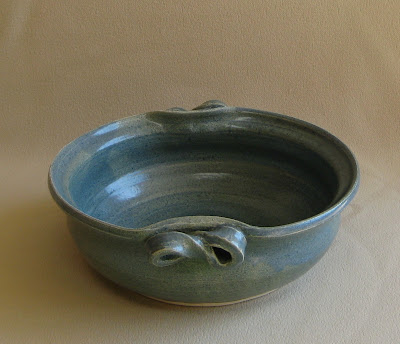 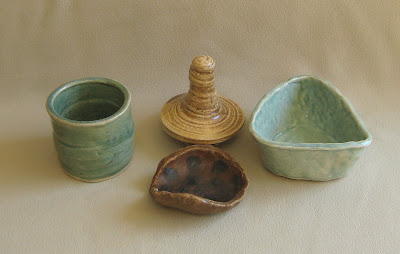 Some pots our grandsons made recently...no, our daughter made the triangular pinch pot. 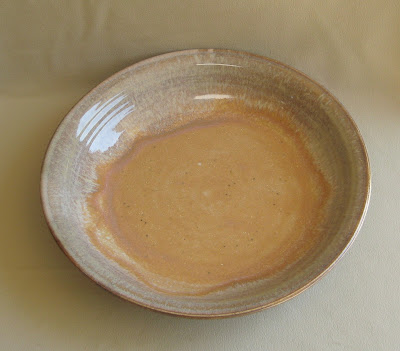 This is a 15" low bowl which I refired. It was pictured here before, about a year ago, but it was creme in the middle and greyish on the sides, with a fairly sharp transition. The creme was a Touchtone base (like Randy's red with only a little RIO) and the greyish part was where it had Touchtone Red (15% RIO) dipped over the creme. So for this firing I dipped the whole thing in Laguna's cone 5 Italian Straw and you can see it fluxed everything and flowed nicely. The picture below, of the underside shows it's action well too. Good thing I didn't have a thicker coating of the Italian Straw or I would have had too much running. 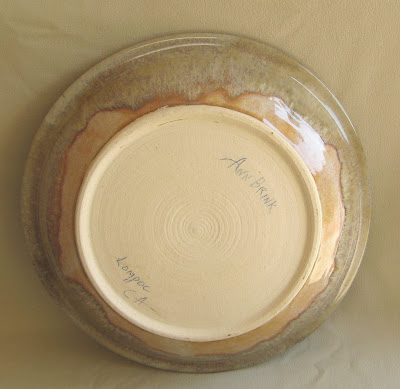 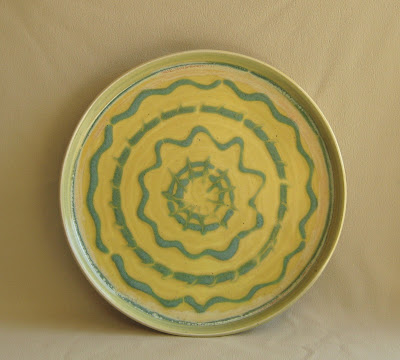 Another refire: it was a plain yellow tray with copper on the edges, so I used an ear syringe and gussied it up a bit. 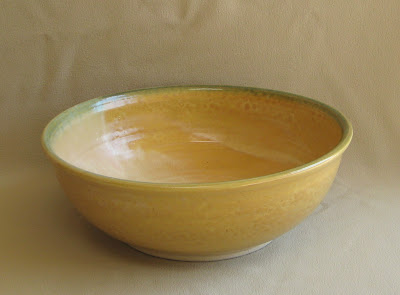 I had an order for one of these, so I made two. 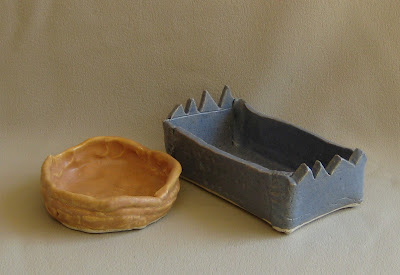 These were made by the grandson of a friend as a Scouting project: he needed to make both slab and coil items. 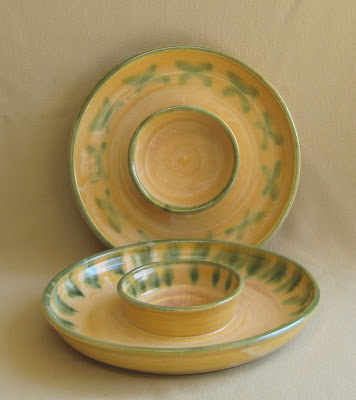 These are 8 and a half inches in diameter; a customer wanted individual snack dishes.

Labels: Pottery-stoneware
Can anyone identify this insect? It was parked on our bathroom wall. It's wingspan is about half an inch. 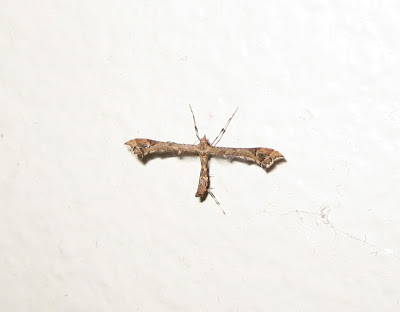 Labels: bugs
Here are some Salsa Sets I made to take to the local Flower Festival Art/Craft show. I've made them for a few years now and they sell well. They are about 6" in diameter. 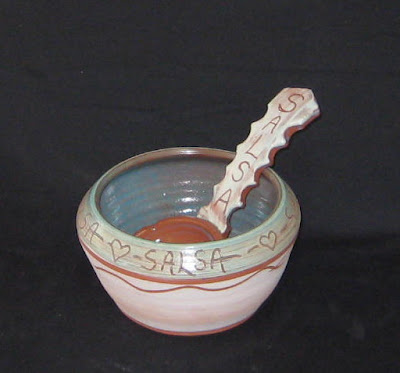 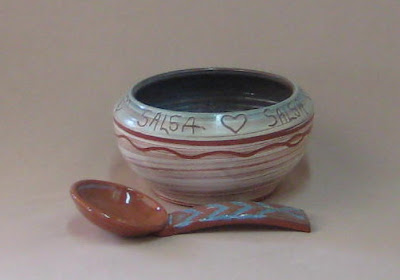 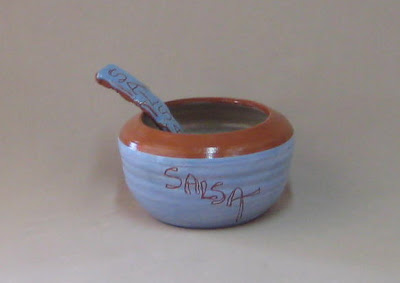 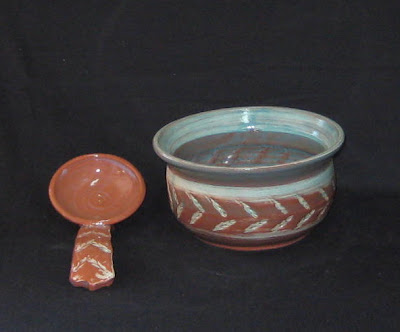 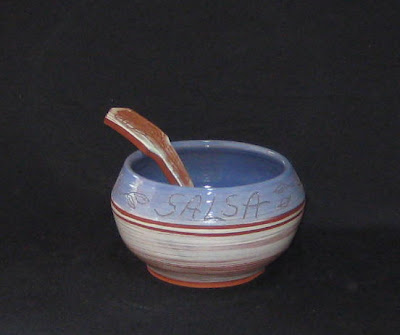 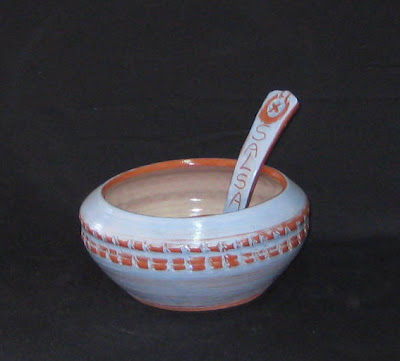 Below are some earthenware pots I made this summer. Some are sold, others available. Their sizes range from 9 to 12" in diameter. 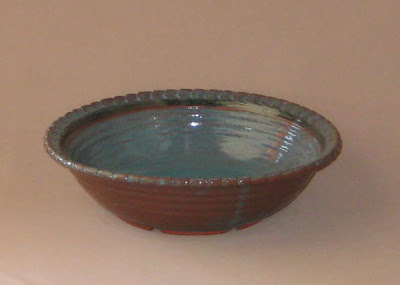 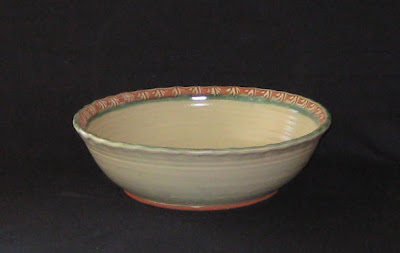 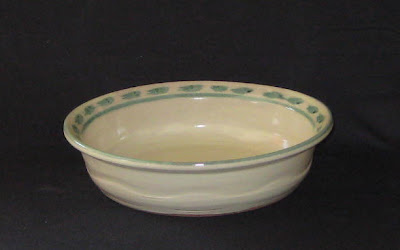 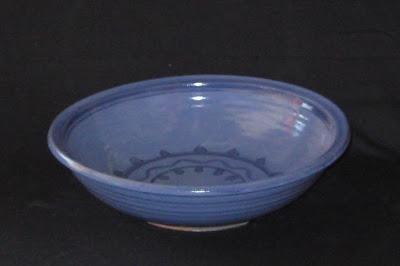 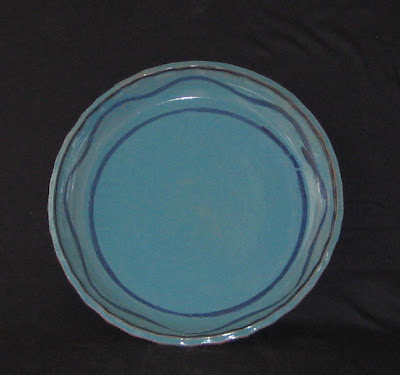 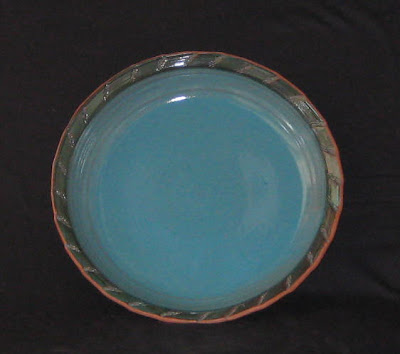 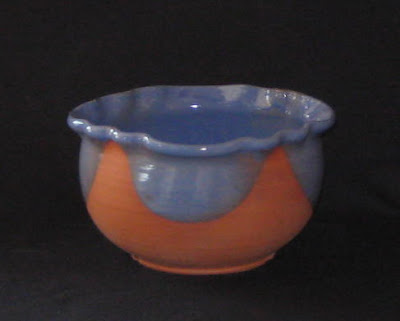 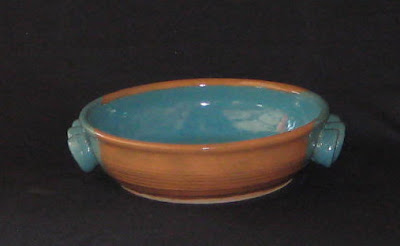 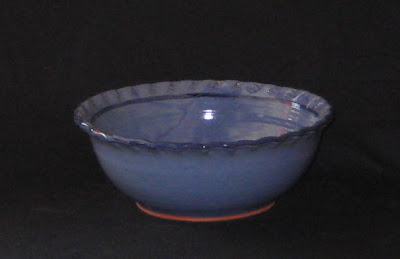 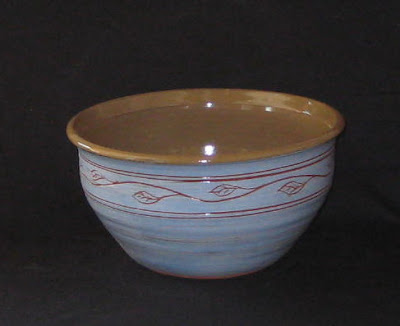