Feeling uneasy the last few days...ever since Hurricane Katrina blew in and did so much damage on the Gulf Coast. At first, after dire warnings for New Orleans seemed overstated, newspeople were saying New Orleans managed to come off lucky again. Then the water began rising in the city, and stories of horrible conditions in surrounding areas began to be told. You hear of floating bodies being ignored because it's vital that rescue workers concentrate on finding people who are still alive but need help. I'm sure there are people all over with friends and family in the flooded areas that they haven't heard from, who are are having nightmares about their loved ones being dead, undiscovered and unattended. A lot of heartbreak yet to come.
Posted by Ann at 9:29 PM No comments:

Here's a poem: I was really into painting in the summer of 1965, and wrote this while working on an abstract painting called "Sleep".

How can one express the inexpressible
or picture something without form;
define with lines the essense of elusiveness?

The art has not been born
where paint can show the shape desires take
nor colors indicate a glow of pleasure;

Perspective on a canvas does not reach
where my imagination stretches;

Pure white is not as light as thoughts that soar in air
nor ebony as dark as feelings plunged in black despair.

But lack of hues precisely true
has not kept man from trying all his life
to fathom mystery with a brush, and thus,
a mortal canvas often has been touched by immortality
and stained with pigments that the soul alone can see
as tones the artist felt, when by approximation,
he gave vent to inspiration;

Mere tints suggest and hint at ecstasy
and knowledge beyond pedantry.

Copper Tubing Sculpture: Posting the wall sculpture photo just now reminded me of one of the hanging sculptures I made a while ago. It's about 14" each direction, and rotates slowly on our patio. It is fascinating to watch it's shape change as it moves. Here are three pictures of it: 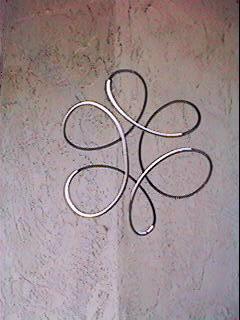 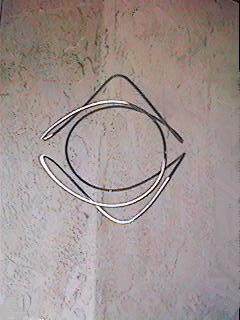 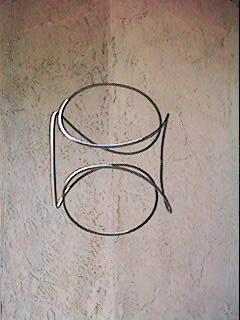 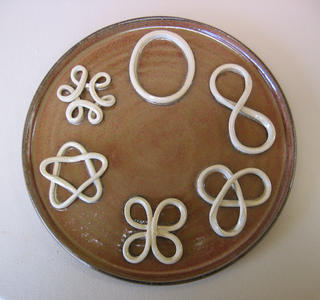 This piece is called "Numbers". It's a 13" diam. wall sculpture, high fired stoneware with Touchtone Red glaze under the white additions. (that's a "1" at the top, BTW, not zero.

Sometimes you just have to go ahead and make something you've been clay-doodling with for a while! You can see it doesn't take much to entertain me- I like looking at shapes made with loops...

It will go into our local art association gallery next Monday and may provoke some conversation; it will be interesting to see if it sells...ok if it doesn't.
Posted by Ann at 8:12 PM 1 comment: 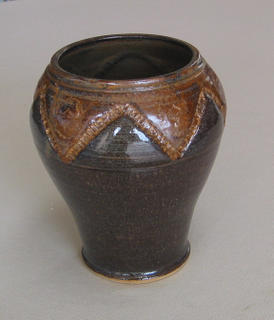 Rutile wash over high iron glaze This vase was glazed with what I am calling "Bad Touchtone" (the batch prior to the latest one) and I purposely gave it just a quick dip, and got a very deep brown/black. Just what I wanted, as a base for this rutile, titanium, and GB wash (recipe from Clayart) which generally adds life wherever you put it, and would, I knew from previous tests, do a sort of nutmeg almost crystal looking effect with slow cooling. The marks are made with a slice of hickory nut.
Posted by Ann at 9:03 PM 3 comments: 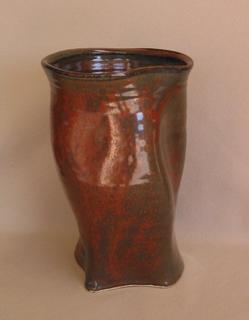 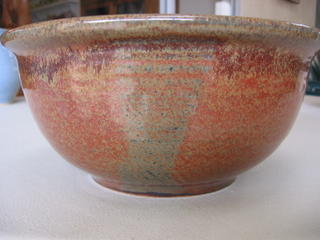 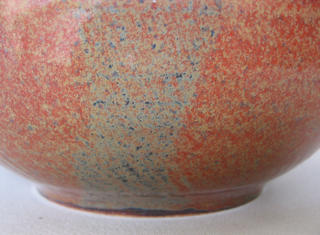 Well, FINALLY, after a day of intermittently being frustrated trying to get the hang of getting my blog started, I changed templates and everything works! I've already deleted about 4 test messages, etc.

I managed to finish glazing a load of pots and will fire tomorrow.
Posted by Ann at 11:32 PM No comments: 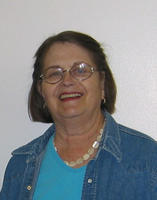 Well, I succeeded in getting my picture uploaded to this post...let's see if anything will show up on the page now. Once this works, I can edit out these posts.