The low-fire firing I did about 4 days ago was a mixture of earthenware bisque, glaze firing, and glaze re-fires. This first pot below was a re-fire and it's done now. It's about 6" in diameter. 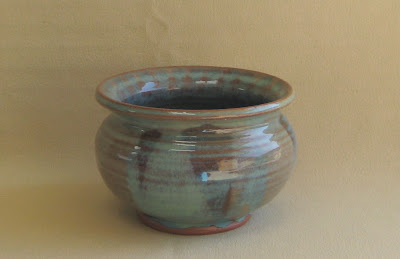 The exterior of this was much greener the after it's first glaze firing- I did go somewhat hotter than usual and some of the color burned out. It's about 9" in diameter. 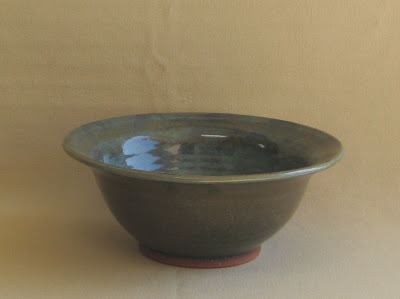 Here is a baking dish, about 11 inches across. The color is from copper, and from Mason turquoise stain, plus some Zircopax. 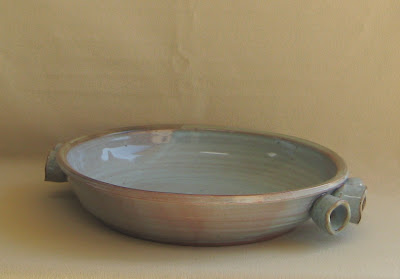 This glaze is the same base, but a little more copper, and no Mason stain. I do have the amounts written down, if anyone wants to know... 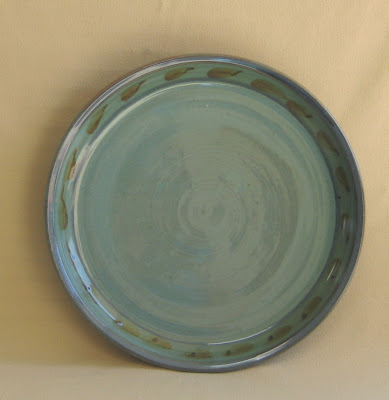 Ah ha, this cachepot was not especially improved by refiring. (see picture below from previous firing) I DID wax the leaves and flowers and pour some creme colored glaze over the exterior, hoping for contrast, but I guess not enough, because it barely shows. And the refired leaves faded to a weird color. Not quite how I pictured it. But someone will like it, I hope. 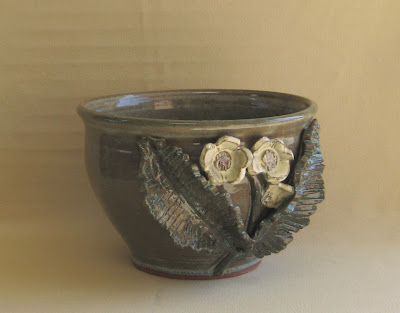 This is the new blue- same base glaze, but colored with cobalt. It's a nice clean blue- I like it. 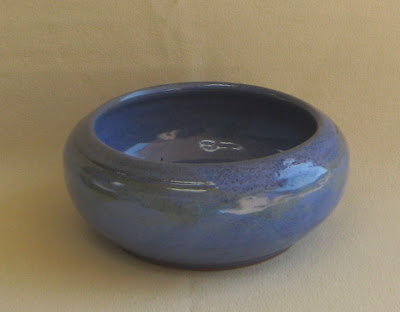 The following pots were glaze-fired February 27. They are earthenware. The first one below is about 7 inches across- a small serving bowl. 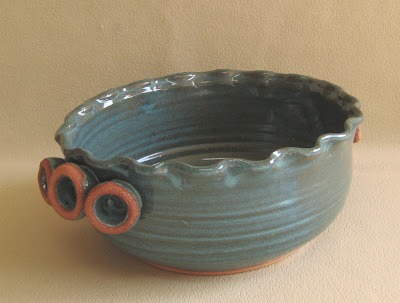 ...a salad set, or could be for soup too. On "Clayart" (a pottery discussion group) there has been a lot of talk about sources of inspiration. Nature is often mentioned. Actually my inspiration for the poppy design is second-hand... my customers love nature. They will buy anything with flowers on it. I never feel I can adequately represent even the simplest things, but people make allowances. 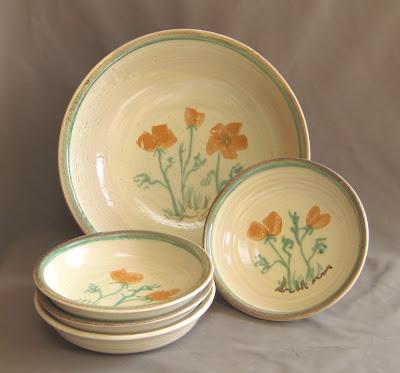 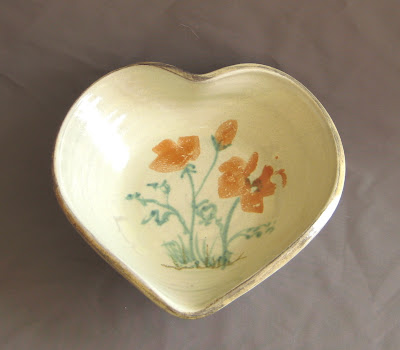 This vase is 6 inches high. You can see how it was made. 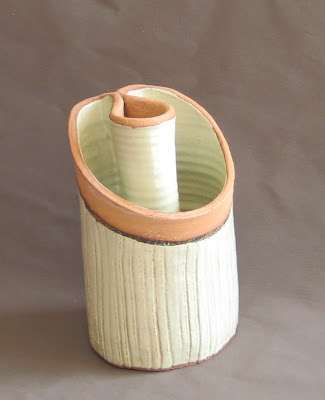 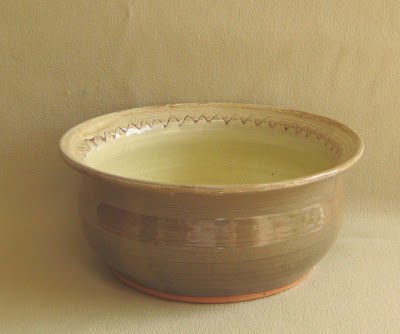 This cachepot is about 9" in diameter. I am going to refire this one, waxing the flowers and leaves, and pouring a lighter glaze over the exterior of the pot, to get some contrast. The new turquoise glaze I mixed up turned out stronger colored than I expected. All it needs is some more opacifier, which I will add to the whole batch. It is a bit more transparent than looks good on earthenware. You'll see this pot transformed after the next firing. 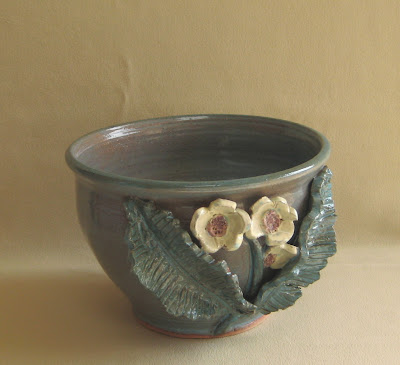 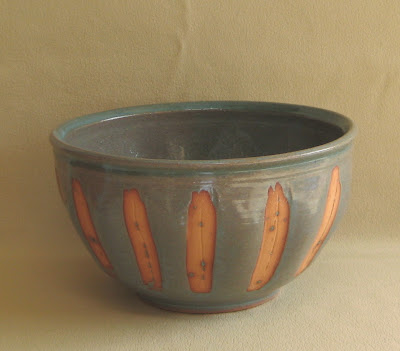 These vases are just under 9 inches tall. The impressions on two of them were made with the edge of a peach pit. The vase on the right is made of a clay from New Mexico given to me by a friend. It has sparkles you can see on the bare clay. 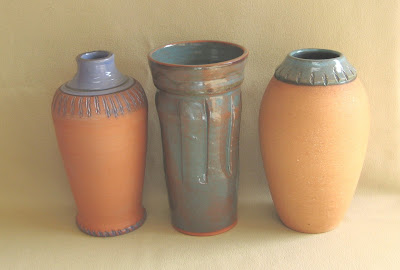 This pair of vases is made from the New Mexico clay too. I want these two to stay together- hope some buyer agrees. 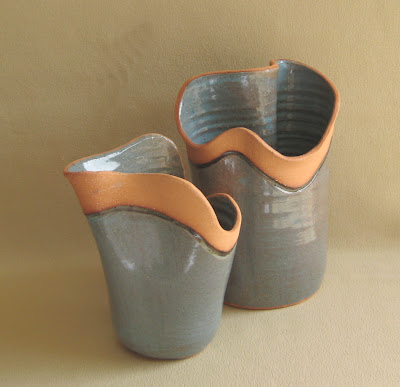 These two pots are of a fine-textured earthenware from Laguna, which I've used the last few years since I haven't been able to get the local clay from the river banks near here. However, when we took off in our plane last Saturday, I looked down (the runway is next to the river) and could see the typical cracked pattern of clay where the water had receded. So I'll go down there and take a look and maybe stock up again. 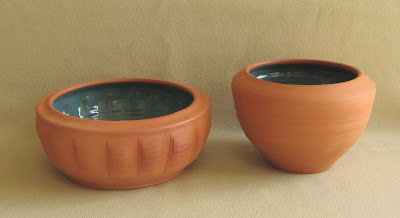 Labels: Pottery-earthenware
I thought I'd show off the quilt which our daughter Karen made for me. She made the quilt top a few years ago, incorporating my favorite colors. She went into some marathon quilting sessions to finish it in time for this past Christmas. I was really surprised. 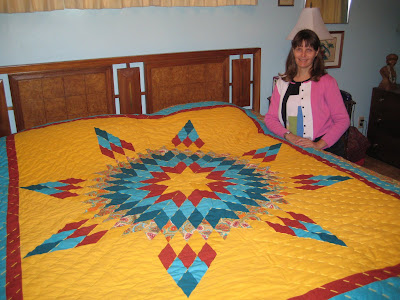