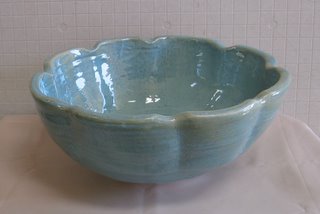 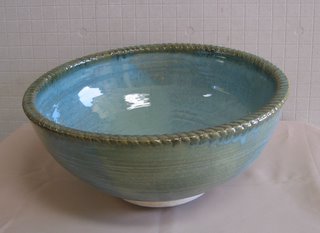 Above are photos of the two vessel sinks I unloaded from the kiln on Valentine's Day; I am SO pleased that nothing went wrong...no cracks, crawling or any of the things that CAN go wrong during the whole process. They have been fired to cone 7 with a soak of 40 minutes, oxidation. I made them thick and sturdy-they each weigh about 16 lbs. The top one is from 13 to 15" inside diameter , and the other is 13 and a half inches ID. The inside depth is 6 inches.

These are the first sinks I ever made and I was helped by several hints I picked up on CLAYART (internet discussion group). One idea was to throw sinks upside down, which I did, and in stages, adding coils as the previous section stiffened somewhat. Another suggestion I used was to fire each on it's own separate thrown base during the glaze firing. Thanks to the people who shared their knowledge.

I don't have plans to make more sinks, necessarily, but I'm going to use the upside down technique to make some BIG bowls!
Posted by Ann at 3:52 PM

nice sinks.. you should be really proud... all the folks on clayart can really be helpfui....

We asked Ann to make a vessel sink for us. She surprised us with two to choose from. It was an agonizing choice. If you'd like to see our choice in situ, visit http://vandolsen.com/vanitydone.html

Wow! I am impressed. Really lovely.