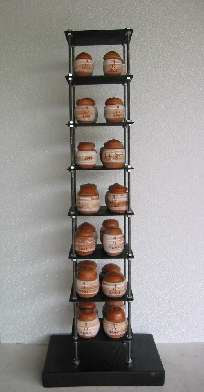 This sculpture is called "Death of Innocents". On 9/11/2001, I had to do something related to what I was hearing and absorbing, so I sat down at the kick wheel and began throwing small jars, one after another, of earthenware. I was making miniature urns. The next day I did the trimming, separating the lids, and applied white slip. Each of the jars has a heart sgrafittoed on one side, and the date on the other side. After single-firing them, I inserted a rolled paper into each, with this on it:


"Death of Innocents"
"This memorial urn is one of a series
Made on September 11, 2001,
to mourn the sudden death of thousands
who were taken unaware
by murderous acts of terrorism
unprecedented in our land,
and to signify the grief and sadness
felt by all who knew each victim."

I constructed the "tower" and the piece was in a show at Alan Hancock college in Santa Maria CA. After the show I gave away several of the urns to people who had lost loved ones that day. I would have liked them all to go to family members, but haven't known how to go about this. I think at some point I will just keep one, and bury the rest somewhere.

I fired the pod and stem separately, then joined them . The overall length of the piece is 31". 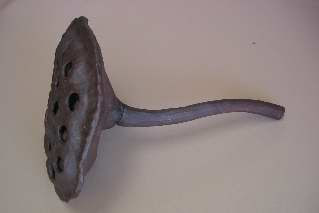